What drives car buyers in today's society? Smart sizes, efficient fuel use, practical capability, and of course, the hidden perks and guilty pleasures. In our continuing series, we examine the most popular cars in America. 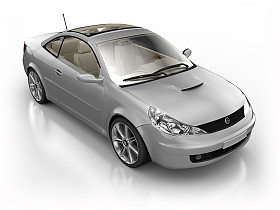 When a car is consistently the top-seller for years, you might think manufacturers would put a moratorium on change. If it ain't broke, don't fix it, some would say.

Which is why the significant redesign of the Toyota Camry with the 2007 models was surprising.

The top car in the country since 2002, ranking only below the perennial favorites of the Ford F-Series and Chevy Silverado, the Camry appeals to people for its practicality, its efficiency, and reasonable prices. The redesign builds on the things that make the car attractive to its base, those drivers who aren't consumed with performance or flashiness. But in the process, its made the car a bit more exciting, a bit more accessible, and reward worthy: Witness the winner of the 2007 MotorTrend Car of the Year.

The new Camry has four trim levels: CE, LE, SE and XLE. Two engine options, the four-cylinder and the V6, are available, as well as an entirely new Hybrid model. Building on stellar gas mileage for the midsize car, which routinely reaches into the 30s on highway roads, the Hybrid uses a Hybrid Synergy Drive setup similar to that of other hybrids like the Prius to reach over 40 miles to the gallon. The Hybrid means even more energy efficiency for the Camry, important to consumers in today's tense energy environment.

The Camry has only increased in sales over recent years, jumping up approximately 8.4 percent in sales between 2005 and 2006. Previous models were blasted by car enthusiasts and European audiences for being bland, and Toyota seeks to keep increasing sales by making its midsize sedan appealing to younger audiences. Thanks to new features in the 2007 model, including better drive performance, more attractive design, and more electronic gadgets, many reviewers and buyers are looking with appreciative new eyes at the Camry.

The Camry and the Camry Hybrid are built in factories across the country, most notably the Georgetown, Kentucky plant. The Camry announced this year an even bigger tie to the heartland and to younger audiences by entering the NASCAR Nextel Cup and Busch Series compeition.

For a complete one-stop look at current Camry features and specifications, and for all the news on new models and features, visit www.toyota.com.