(3/28/2012) On tough news from the S&P/Case-Shiller Home Price Indices, Zillow's real estate market experts pulled a Mulligan on their forecast for home prices this year.

It didn't help their game and it could be premature.

Instead of a nearly flat 0.2 percent decline in home prices in 2012 forecast last December, home prices will fall nearly another 1 percent this year, according to Zillow's March Home Price Expectations Survey.

Zillow's survey was conducted by Pulsenomics LLC, based on the projected path of the S&P/Case-Shiller U.S. National Home Price Index (HPI) during the coming five years. 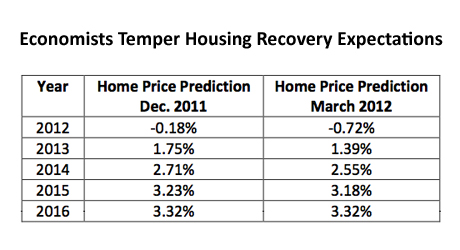 "The fourth quarter drop in the national Case-Shiller Index was sharper than some expected and is the likely reason so many of the economists in the survey revised their forecasts downward," said Zillow chief economist Stan Humphries.

"Looking at the longer history of these forecasts by top economists, the bottom in home prices always seems just around the corner, but never quite here. Some markets have already hit bottom and are experiencing tight inventory and multiple offers, while foreclosures and negative equity continue to pull down the housing market in many other parts of the country," Humphries added.

Forecasts over the past year have put full recovery to the last peak market prices out as far as 2020, but more and more often, experts see 2012, the "Year of the Dragon," as the year recovery will at least begin.

John Burns Consulting indicates Zillow's group may have jumped the gun or are just being to conservative. The "Burns Home Index," touted as current and more relevant, reveals home prices have been rising for three months in 90 of the 97 markets John Burns tracks.

Burns says the HPI, along with price reports from the National Association of Realtors (NAR), Federal Housing Finance Agency (FHFA), and others are lagging reports, seen through a rear view mirror.

Burns' report indicates the housing market bottom has arrived, and the market already may be in recovery mode. Burns says the average price increase over the past three months has been 1.1 percent, or a relatively amazing 4.5 percent annual rate, virtually the opposite of what the Zillow group forecasts.

Zillow's survey indicates the bottom is still about a year away. It's experts say home prices will begin to rise in 2013, but the experts also tempered that forecast.

Back in December, Zillow's experts said prices would appreciate by 1.75 percent in 2013. After the recent HPI, that was tempered with a reduced 1.39 percent home price increase forecast.

Forecasts from the Zillow group varied widely with the most optimistic quartile of panelists predicting a 1 percent increase, on average, during 2012, while the most pessimistic predicted an average decline of 2.8 percent for the year.

One bullish economist in the Zillow forecast, Susan Sterne of Economic Analysis Associates Inc., predicted home prices will climb 5 percent during the year. The bear was Gary Shilling of A. Gary Shilling & Company, Inc. He expects prices to fall 8 percent this year.

"The majority of experts believe that implementation of a bulk sales program is a good idea, even though more than half indicated that it is at least somewhat likely that bulk sales will materially depress overall price levels in housing markets. However, 79 percent believe that a government bulk sales program will result in a shorter waiting period before the onset of a broad and sustained housing market recovery," said Terry Loebs, founder of Pulsenomics.

Follow the link to continue reading the related articles

Home prices fall, but so does spending power