(6/29/2011) ERATE Exclusive - If you asked a credit union for a subprime loan years ago, they probably sent you down the street to a bank and you may have forgotten they are there.

They are. That bank may not be.

Put credit unions back on your list of mortgage comparison shopping stops.

There's likely a credit union or two you can join and you do have to be a member to bank with one. Check your credit union membership prospects where you work, through trade and labor groups, unions and associations, as well as neighborhood-based organizations, and the National Credit Union Association (NCUA), the regulator for federal credit unions.

Credit union mortgage rates often beat bank rates and, as financial institutions, they appear to be holding their own.

"Consumers are a bit confused and unaware they, in fact, qualify for membership and in some cases are eligible to join more than one credit union. Millions of people are members of credit unions and hundreds of millions more are eligible to join and likely don't even know it," says Bob Dorsa, President of the American Credit Union Mortgage Association (ACUMA).

The latest data, as of March 25, 2011 reveals credit unions had better interest rates than banks on adjustable rate mortgages (ARMS), home equity loans and unsecured fixed rate mortgages (FRMS), according to the NCUA.

Not only are credit unions going strong, they are growing. In March 2006, just as the housing market was going bust, NCUA credit unions held $119.6 billion in real estate loans. By March 2011, that had risen to $163.4 billion, according to NCUA.

Credit unions thrive because they are not in the business to make a profit, but to serve members. They serve members who pool their money to get a decent return, either in the form of savings interest or competitively priced loans.

At credit unions, the fundamentals apply: Credit unions take in deposits. They use the money to make loans. They charge more on those loans than they pay on deposits. That's smart business.

It's the lack of the profit motive that kept credit unions out of harms way during the mortgage meltdown. They had no incentive to get involved in the subprime racket, no reason to sell and repackage loans as toxic investments and no need to otherwise venture into untried and untrue investment schemes.

Credit unions hold most loans to maturity and return the interest to members in the form of interest-bearing checking, savings and CD accounts, which also have rates that often beat banks'. The rest they invest smart so they can continue to help members.

Relatively untainted by the credit squeeze, credit unions have both money to burn and a sound business foundation that allows them to keep on lending.

With a loan growth rate (all loans) of 4.3 percent over the past five years, credit unions' loan delinquency rate was only 1.76 percent last year, compared to 5.17 percent for banks, according to the Credit Union National Association (CUNA)

That low default rate means you shouldn't expect to be coddled at a credit union when you apply for a mortgage. You'll still have to be honest on your application, creditworthy and have to ability to make your mortgage payments. Don't expect to get more home than you can truly afford.

Investors move to the head of the home-buying class

Is your real estate agent packing the latest technology? 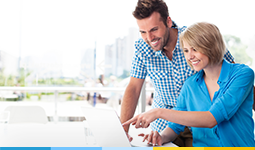