John Burns Consulting reported this week, buyers seeking the greatest bottom market bargains may have missed the boat if they used as their guide home price trends reported by the National Association of Realtors, Federal Housing Finance Agency (FHFA), S&P/Case-Shiller and others.

The "Burns Home Index" reveals home prices have been rising for three months in 90 of the 97 markets it tracks.

Other indicators show price improvements only in the last month, at best. 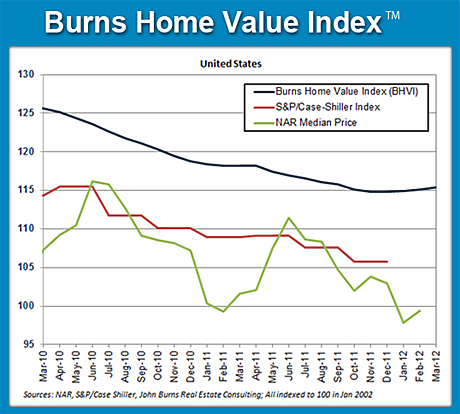 Burns says the average price increase over the past three months has been 1.1 percent, or a relatively amazing 4.5 percent annual rate.

"This is big news, so why isn't anyone else reporting it? It is because most price indexes are at least 3 months behind what's happening with home prices right now," says Burns' blogger Wayne Yamano.

If Burns is accurate, that news is on fire.

It comes at a time when another lagging indicator reports affordability hasn't been what it's cracked up to be. And that means missing the bottom could be even more costly for fence sitting buyers.

During the housing crash, many markets saw home prices slashed by as much as 50 percent in some of the hardest hit areas, especially when foreclosed and other distressed properties were tossed into the mix. With mortgage rates at record lows the market should be screaming "affordability."

In one measure, from 2008 to 2010, housing costs fell an average 2 percent, but household income fell more than twice as much, by 5 percent, according to the Center For Housing Policy's (CHP) "Housing Landscape, 2012."

Unemployment and under-employment has had more impact on affordability then lower home prices and cheap interest rates, according to the National Association of Home Builders' (NAHB) new "Priced-Out Effect" report.

The model estimates how many households can qualify for a new home mortgage before and after a house price increase. The resulting difference is the number priced-out households.

Displayed as a pyramid of affordability, with less-expensive homes at the base, the model reveals a crowded base where a large number of households have relatively modest incomes. As the price of a home goes up, the pyramid narrows, climbing with fewer and fewer households in each tier able to afford higher priced homes. 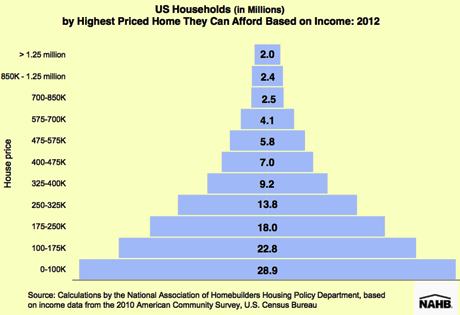 Based on conventional assumptions and underwriting standards that included a 10 percent down payment, it takes an income of about $26,430 to purchase a $100,000 home, according to the NAHB.

In 2012, about 28.9 million households in the U.S. are estimated to have incomes lower than that threshold and, therefore, can only afford to buy homes priced under $100,000.

Together, those who can afford housing priced at or below $175,000 make up nearly 52 percent of all households.

At the peak of the pyramid, where the 1 Percenters live, only 2 percent of households can afford to buy.

Not that there's any love lost way up there.

Follow the link to continue reading the related articles

Home prices fall, but so does spending power