Aug 18, 2008 - The central bank recently determined that the number of lenders reporting to have tightened their lending standards is at record levels.   New stricter guidelines are in place as many lenders have suffered heavy loan losses which have drained their capital reserves making it more difficult for them to sustain future losses and resulting in market conditions which are extremely challenging to sell mortgages, as well as other types of asset-backed securities, in the secondary market where lenders refresh their supply of capital.  Lenders are having difficulty funding loans in this new climate of scarcer resources for even their best credit customers.  The new tightened lending standards are creating an environment where stingy credit may be slowing the recovery process of the over all economy.  Lenders across the board are facing greater challenges in securing a loan against any asset (primarily real estate) which may be declining in value. 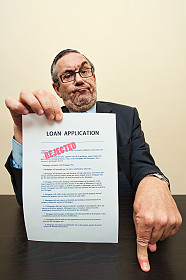 Almost 75% of banks and lending institutions surveyed admitted to having tightened their lending standards for all prime mortgages they underwrote.  Roughly 30% of lenders within the U.S. indicated they had now underwritten, packaged and sold mortgages reaching the new conforming maximum (of $729,750) to Fannie Mae or Freddie Mac within the previous quarter.  However less than 15% of the lenders surveyed were still underwriting sub-prime mortgages and over 85% of those lenders choosing to remain in the sub-prime market now applied stricter lending guidelines when extending sub-prime loans.   The new loan standards being applied have not been restricted to only first mortgages as tougher conditions exist for both home equity loans as well as credit cards.  Roughly 80% of the banks surveyed indicated they had tightened their lending standards and for those lenders extending credit card debt, the rate nearly doubled in numbers for those claiming to have tighter lending guidelines.  More restrictive guidelines for consumer loans could cut the consumer off at the knees just as the well of home equity may be drying up.  Surprisingly, rates were lower at the time the Fed began their series of rate cutting measures than they actually are today.  It appears a “perfect economic storm” is brewing which includes falling home prices, rising inflation and a job market which appears to be steadily weakening.   Poor performing loans have shifted from just the mortgage category onto a variety of other debt, including credit cards and auto loans.  In today's environment of tightened lending standards, raising capital has become more difficult for lenders who are faced with a wave of bad debt write-downs just as the consumer is searching for new sources of funds to tap into, making the strain on the economy likely to continue into the foreseeable future.