(4/16/2012) - In a second report this year charging mortgage lenders with committing foreclosure abuses during National Mortgage Settlement negotiations designed to stop those abuses, every housing counselor surveyed said lenders continued at least one kind of foreclosure abuse right up until the agreement was signed - if not longer. 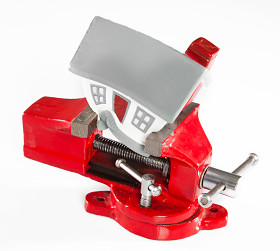 A California Reinvestment Coalition (CRC) poll in January and February 2012 of 70 counselors representing 50 nonprofit housing counseling agencies across California reported 100 percent of surveyed counselors said, during the polling period "dual tracking" was a "serious and common problem that was devastating families."

The National Mortgage Settlement, was signed Feb. 9, 2012 (as CRC was polling counselors), as an agreement between mortgage lenders and federal and state officials for mortgage lenders to stop dual tracking and a host of other abusive foreclosure measures institutionalized by lenders after the onset of the housing crisis.

The study indicates mortgage lenders either weren't negotiating in good faith, weren't living up to the settlement right away or both.

"It's like bombing civilians during a military cease fire," said Robert Aldana, a 25-year real estate veteran and publisher of "LetsTalkRealEstate.com."

It's very clear and apparent the amount of integrity that these lenders lack. It is disappointing to say the least, but not surprising, given the history of their actions. The problem however is not just with the banks, but with government that allows them to continue in their path of destruction towards consumers. Every which way you slice it, it has scam all over it," Aldana added.

"Dual tracking" is the practice of simultaneously working with a homeowner on a mortgage modification while also foreclosing on the homeowner's property, considered heinous subterfuge against homeowners.

"As banks were making more promises to policymakers and consumers, counselors overwhelmingly reported the lack of accountability for bank's failures. The survey highlights the need for strong enforcement of the settlement and permanent consumer protection legislation in California that protects Californians from irresponsible foreclosure prevention practices," the report says.

In March, after the settlement was signed, a group of consumer law advocate groups, in "Servicers Continue to Wrongfully Initiate Foreclosures: All Types of Loans Affected," likewise said flat out, "These (foreclosure abuse) practices are current and widespread."

The $25+ billion National Mortgage Settlement between the federal government, states attorneys general and five of the nation's largest mortgage servicers, came after a year-long investigation into an institutionalized culture of foreclosure abuse.

The settlement is the largest ever federal-state civil settlement.

It targets a twisted, in-house culture of foreclosure violations including "robo-signed" (falsely signed or recorded) foreclosure documents; "dual tracking" (simultaneously working on a mortgage modification while foreclosing on a homeowner), failures to offer non-foreclosure alternatives before foreclosing; filing improper federal bankruptcy court documentation, losing and misplacing crucial homeowner documents and generally giving distressed homeowners the runaround, rather than a single point of contact.

According to the U.S. Department of Justice, the joint federal-state settlement agreement requires mortgage servicers to implement unprecedented changes in how they service mortgage loans, handle foreclosures, and ensure the accuracy of information provided in federal bankruptcy court.

Conducted in January and February 2012 - the eighth since 2007 - CRC's survey collected responses from more than 70 counselors representing 50 nonprofit housing counseling agencies across California that collectively serve thousands of borrowers a month.

The survey comes amid charges lenders are buying off California legislators to block upcoming votes on a California Homeowner Bill of Rights designed to strengthen national settlement provisions for Californians, one of the nation's hardest hit states in the housing crisis.

Consumers Union, publisher of Consumer Reports, has called for California lawmakers to do right by the state's homeowners and enact legislation to create the bill of rights.

"Californians are still vulnerable to abusive mortgage foreclosure practices that have contributed to a record number of homeowners losing their homes," said Norma Garcia, Senior Attorney for Consumers Union.

"These bills will help ensure that Californians struggling to pay their mortgage will be treated fairly and stand a better chance of avoiding foreclosure," Garcia added.

• All, 100 percent, of surveyed counselors reported that dual tracking was a serious and common problem devastating families.

• Most, 86 percent of counselors reported that clients "often" or sometimes" have their home sold while their bank is considering their loan modification application.

• Principal reduction loan modifications are needed, financially feasible, but still rare - 84 percent of counselors indicated that the Big 4 Servicers "always" or "almost always" fail to reduce principal when granting modifications. Counselors reported that banks were much more likely to reduce principal on loans that they owned, rather than those that they serviced.

"This stark contrast indicates that banks are not operating in the best interest of investors," CRC reported.

• Most, 58 percent of counselors thought that borrowers of color "often" or "sometimes" experienced worse outcomes, up from 44 percent last year. Fair housing issues are further clouding the lender behavior landscape.

• Mortgage servicers failed to meet almost all of the key metrics that they have promised to fix over the last few years, including preventing delays, keeping paperwork in order, and more. In addition, HAMP continues to fail homeowners as denials and being stuck in trial modifications continue to be identified as the most likely outcomes for HAMP applicants.